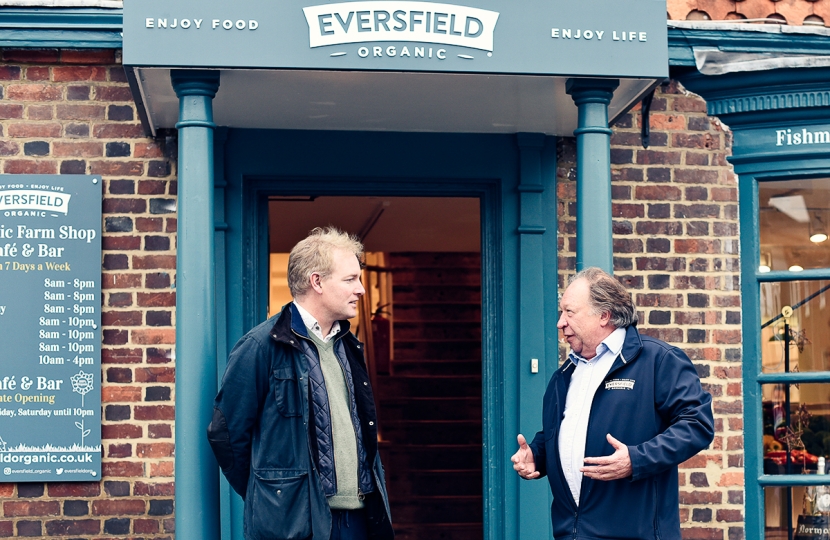 This week Parliament voted to ban MPs from taking political consultancy jobs, of the sort that got Owen Paterson into such deep trouble, and to ensure that we give our constituencies and Parliamentary duties the time and attention they need. In the debate on this plan, on Wednesday, I spoke about the need for a more thorough overhaul of the role of money in politics (see here). I am uncomfortable that my party takes so much money from property developers (the very companies we are fighting to preserve our villages and fields from ugly over-development), and that the Labour Party takes so much money from trades unions.

It was a pleasure to get around Marlborough on Friday and pop into a series of shops with Victoria Tapper, a local photo-journalist who is collecting stories of businesses coming out of lockdown. There are no empty shops in Marlborough now, and the town was as busy as I’ve ever seen it on a weekday. The Devon-based farm shop Eversfield Organic (pictured above), in the double-fronted bay windows where Accessorise and the Edinburgh Woollen Mill used to be, is a welcome newcomer; they are looking for more Wiltshire suppliers, so let them know if that’s you.

I had lunch at the Swan in Wilton with a group of farmers who give me informal advice on agricultural policy. We ate partridge pie: Bill, the Swan’s landlord, sources the partridges from David Lemon, one of the gang at the lunch who farms hereabout, and very good they were. The economy of local, tasty, healthy, environmentally sustainable, properly-priced food we all want seems tantalisingly possible in Wiltshire. Multiple barriers are in the way, however, including the monopoly purchasing power of supermarkets; the health and safety regs that have driven local abattoirs out of business; the shortage of labour and the disinclination of young British people to become farm workers and slaughtermen; and competition from other countries that don’t have our high food standards. We need the new subsidy system that replaces the EU Common Agricultural Policy to reward good food production, and help create the market we need.

Crossing the Kennet in Marlborough as dusk fell, Victoria and I came across a pair of gents with binoculars, leaning on the bridge. They were there for the dipper (a black little bird, ‘remarkable in its method of walking into and under water in search of food’, says the RSPB) that has taken up residence here in recent weeks. This is a very rare thing, and a sign that the Kennet is cleaning up. I’m pleased to hear it, but much remains to do. On Monday I launched my campaign to radically improve the Kennet and the two Avons, the Hampshire and the Bristol (‘Avon’ means ‘river’ in Anglo-Saxon).

These three rivers all rise in our district, and between them water most of southern England. A drop of rain falling on Morgan’s Hill, north of Bishop’s Cannings, could flow into any one of them, and so end up in the Atlantic, the Channel, or the North Sea. I have got together with my neighbouring MPs to pressure the Government into requiring Ofwat, the water regulator, to take the necessary action to clean up our rivers. You can see the short video I made on Morgan’s Hill setting out what we want.

Earlier this year the Chairman of the local Conservative Party, Rupert Stephenson, and I set up the Devizes Constituency Community Fund. This is a non-partisan, indeed entirely non-political effort (managed by the Wiltshire Community Foundation) to raise money for local causes. We have given away £20,000 to projects supporting people affected by the pandemic, and are now seeking further funds to support particularly charities working with young people in our area. Rupert has organised a fantastic online auction of prizes, ranging from a paramotor flight with Bear Grylls to (for the less adventurous) dinner with my mum and me, and a huge number of brilliant opportunities in between. Please do have a look at what’s on offer here, and you might find your Christmas shopping is suddenly done.