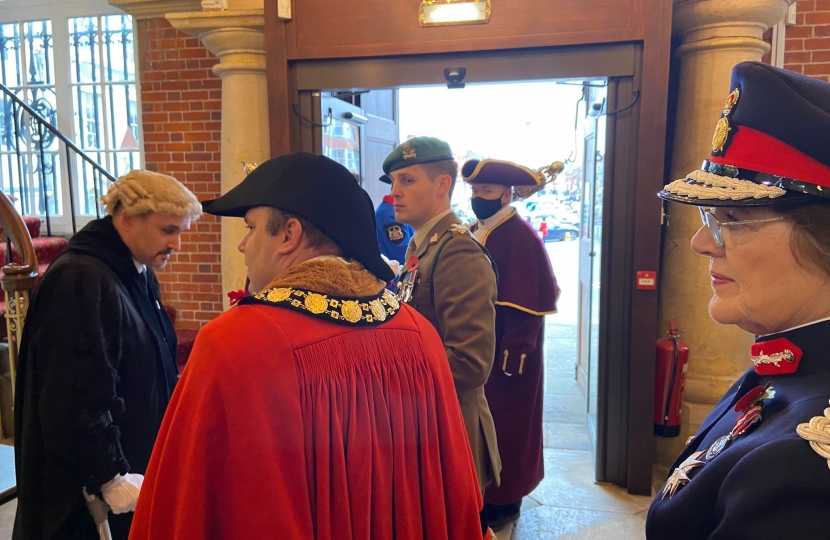 Sewage and sleaze… Tory MPs have been wading through both for the last few weeks. I’ll address both in a moment, but a more edifying and honourable occasion should come first.

Yesterday I joined the Lord Lieutenant of Wiltshire, the Town Mayor and councillors, soldiers from 4 Military Intelligence, and a medley of public servants, cadets, scouts, brownies and a large crowd to pay our respects at the war memorial in Marlborough, followed by a service at St Mary’s Church. After last year’s socially-distanced event at Tidworth it was a great thing to see so many people, under the grey sky and in the silence broken only by birdsong, parading through the town to remember our fallen. We also held in mind the sacrifice made by many serving personnel still alive today and, never forget, their families.

I spent Saturday morning knocking on doors in Devizes in support of Maria Hoult who is running for the vacancy on the town council created by the sad death of Ray Parsons. People raised the usual local issues but also, as one would expect, the state of the Government, and the recent stories about standards and outside earnings.

As I explained in last week’s newsletter, I believe we need to improve the process that effectively tries and convicts MPs over breaches of the rules on standards without the cross-examination of witnesses or the chance of appeal. But that lawyerly position doesn’t remotely address the underlying issue that people are outraged about. This is the fact that money has worked its way into Parliament once again, like water finding its way into a poorly caulked boat.

Lobbyists (whether for businesses or trades unions or someone else) will always try to open a gap for special interests; and being human MPs will always be tempted to let them, or simply to interpret the rules on expenses or outside earnings in ways that leave them better off. 12 years ago we had the scandal around the use of expenses, and the system was significantly tightened up in consequence. There now needs to be another hard look at the way MPs are paid, and what - if anything - they are allowed to do outside the day job.

For my part I am sorry for having damaged the trust in which Parliament is held, and tarnished the reputation of our Party, by supporting the Government’s effort to circle the wagons around Owen Paterson. He deserved a better and fairer process, but the public deserved clearer evidence that we do not tolerate MPs lobbying government for profit. This is now needed more than ever.

On Monday we voted through the last stages of the Environment Bill. This is a landmark piece of legislation that - like the Agriculture Act that passed earlier this year - will radically improve the state of nature in England and Wales over the decades ahead. It also stipulates that water companies must progressively reduce the amount of raw sewage that is discharged into rivers every times there is a rainstorm and the sewers overflow.

One way to achieve this reduction is by water companies building more pipes and sewage treatment works, and this does need to happen. But far better would be houses not making their surface rainwater flow into the sewers, and best of all, nature-based solutions for dealing with the sewage. I saw a fantastic example of this on Friday at Langford Lakes, the nature reserve owned by the Wiltshire Wildlife Trust on the River Wylye just south of the A303. Here an artificial lake full of reeds acts as a natural treatment works, turning the foul water that flows into it from a pipe into clean water for discharging into the river on the other side. You can watch a very quick video I made with the boss of WWT and a director of Wessex Water here. This week I will announce a further campaign that will, if successful, significantly improve the health of our rivers.

I made a dash to Glasgow (by train, do not fear) on Wednesday to keep 1.5° alive. Actually I was simply giving a speech at the Climate Challenge Innovation Awards, to recognise some amazing work by universities, businesses and civil society organisations around the world in developing new technologies and practices to reduce global warming. In my speech I stressed the opportunities these innovations offer for a greener future - but also for a transition that doesn’t penalise ordinary people who need to drive to work or heat their homes.