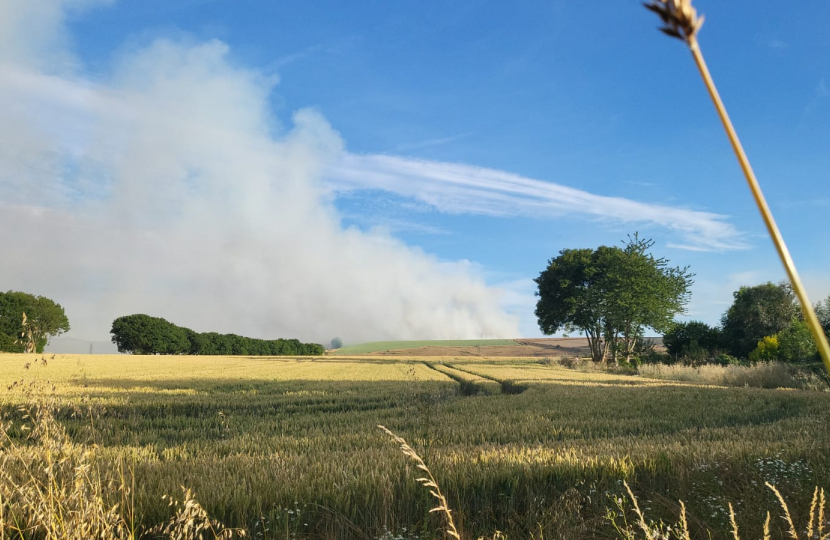 In the middle of last month four large fires were ignited on Salisbury Plain as a result of activity by the military. The first one, near Shrewton, was started by incendiary devices - flares and tracer fire - and the subsequent ones by ball ammunition which, while not actually on fire themselves, strike sparks when they land. Two of the fires, east of the Lavingtons, were simultaneous and eventually joined to cover an area of 630 hectares - the largest fire in this area for 30 years.

I met this morning with Dorset and Wiltshire Fire and Rescue Service Assistant Chief Fire Officer Andy Cole to review what happened. I am full of respect for the many firefighters who attended and the brave work they did in very difficult circumstances. The fires were mostly in ‘impact areas’ which have tight restrictions due to unexploded ordinance - some areas cannot be accessed by humans at all, which made firefighting rather difficult. The role of a helicopter with buckets of water was therefore essential - though even this had to fly at over 200 metres, far higher than usual and therefore less effective, because of the danger of munitions going off beneath it as the fire reached them (as did in fact happen).

The Fire Service and the MOD are currently reviewing their processes, including the risk assessment process that caused someone to approve the firing of flares during exceptionally dry and windy weather, and the availability of firefighting kit, including supplies of water, on the Plain. I look forward to hearing the outcome of this review.

More importantly, both Andy Cole and I consider the real prize to be the renewal of permission for grazing across more of the impact areas. The best defence against wildfire - apart from not shooting flares - is shorter grass, and it is only since the MOD recently restricted the grazing that the risk has increased so much. I have been in touch with the Defence Minister about this already and will continue to press for a change to the rules.