Taking part in the nationwide virtual lobby for climate change 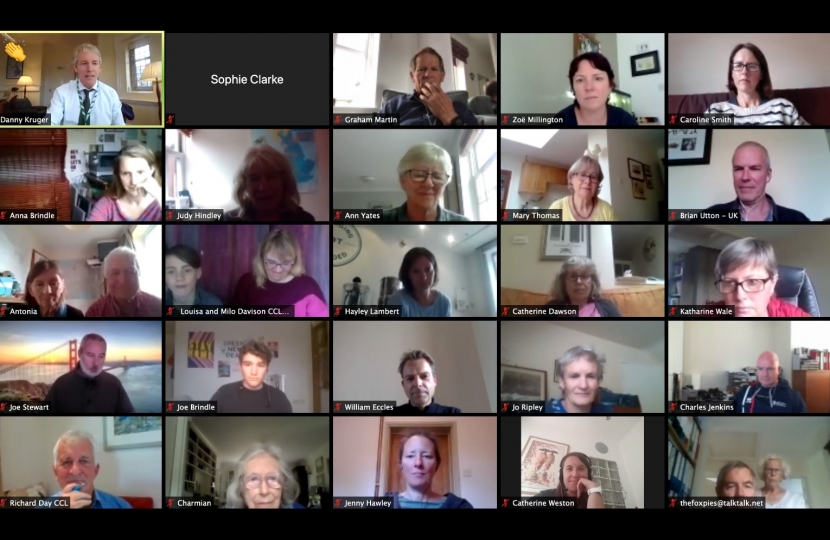 On Tuesday I was invited by many constituents to host a Zoom call on climate change, as part of a national virtual lobby of Parliament. Across the country more than 200 MPs held calls to discuss the environment, and more than 13,000 people took part in these calls and other events, co-ordinated by the Climate Coalition.

For Devizes, I was joined online by 32 participants for a constructive and illuminating conversation about how to tackle climate change. I was encouraged hearing constituents’ ideas and solutions to address this issue and while I was – rightly – challenged on the topic, the conversation was positive throughout.

We discussed, among a number of topics, the Government’s environmental policies, including the ambition to bring all greenhouse gas emissions to net zero by 2050. A large part of this will be to encourage greener travel where possible, including railway, electric buses, bikes cycle routes, car charging ports and shared vehicles. Before yesterday’s climate lobby, I was pleased to take part in an online Q&A session with the Transport Minister and officials from his department about the next stages in creating a new station to serve Devizes and the wider constituency. As I have written before, this is the start of a long process, but I am very excited by the prospects it could bring. I will also be following up with the Department for Transport on the practicalities of introducing buses which operate on demand, to ensure journeys are not wasted, and as many people as possible can benefit from one trip.

I have previously held meetings with Devizes Climate Lobby, specifically discussing the idea for a Carbon Fee and Dividends (a policy to reduce carbon emissions by putting an escalating fee on fossil fuel consumption and returning the revenue to citizens in equal payments) a topic which was also brought up yesterday, and which I have pledged to investigate further and I will be asking the Government why it has not implemented such a scheme. I have also pledged to improve my own knowledge of the topic, including improving housing energy efficiency and insulation for new builds and retrofitting existing buildings.