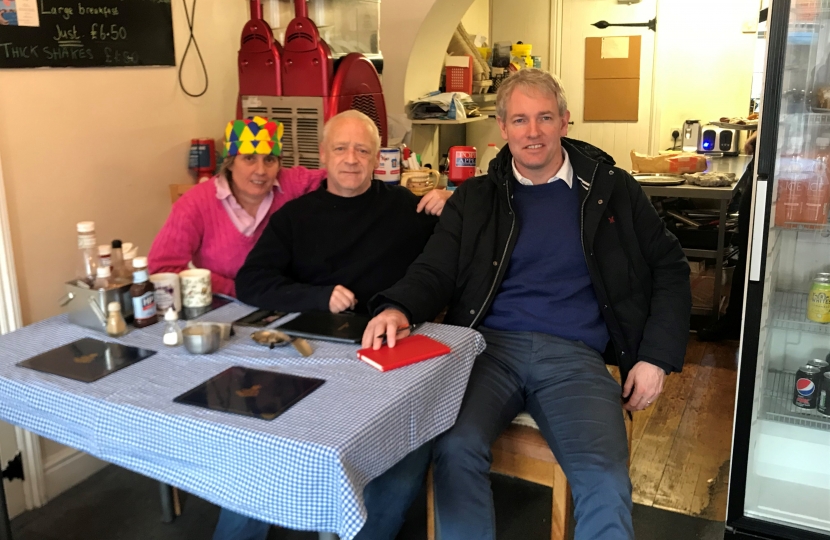 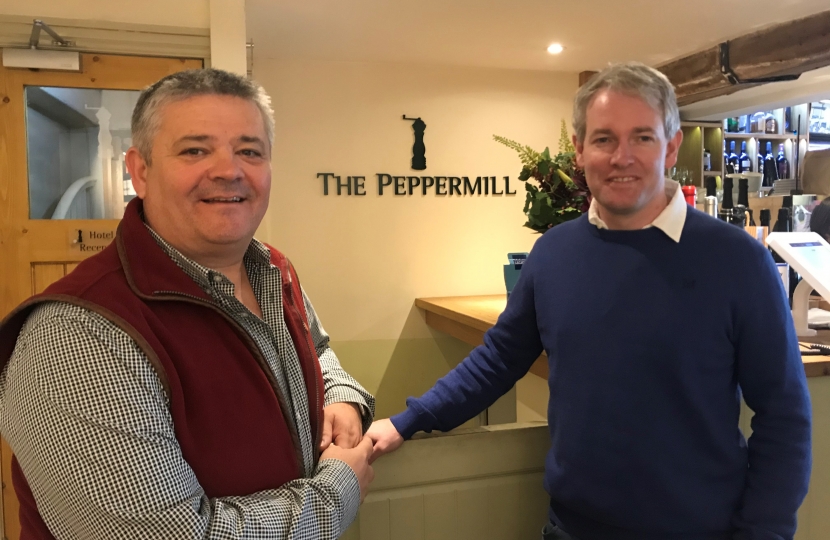 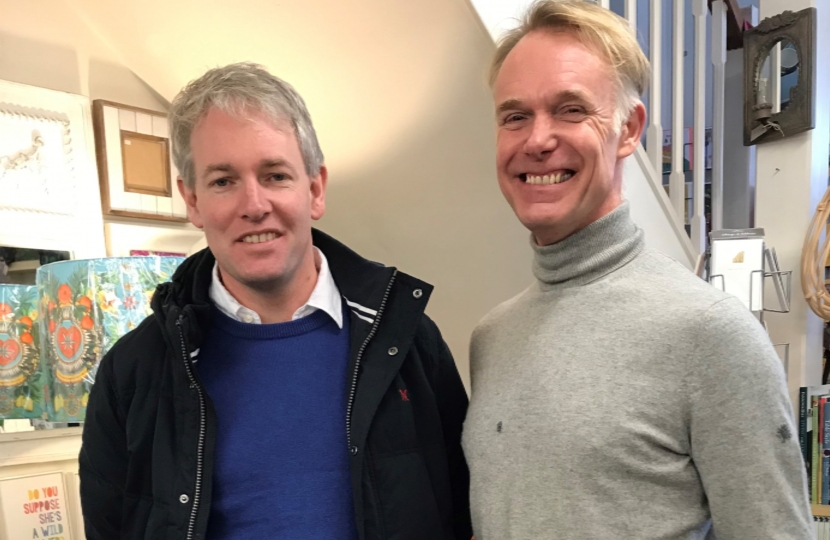 Danny Kruger has been visiting local businesses in Devizes and talking to people about the town.

Danny said, “It’s really important to me that I get to hear about Devizes and the other towns in the constituency from the people who live and work in them, so I will be out and about every day talking and listening to residents and business owners. I want to get a feel for what they love about their communities and what their concerns are.”

The Conservative candidate called into Jefferson’s café in Monday Market Street to talk to owner Leander Williams about how changes in retail habits were affecting her Sweet Shop, Savannah’s in the Brittox and the café.

Leander said, “Small businesses like mine are still finding things very difficult. Business rates and increases in the minimum wage have a massive effect on my businesses. So I asked Danny Kruger what a new Conservative government is going to do for small business owners like me. I know that traditionally the Conservatives have supported start ups and encourage people to branch out on their own, but we need as much help as possible in the first few years to get established. I also asked what was happening with the urgent treatment centre. We have been promised better facilities for years and it’s still just a field.”

Danny said, “The Conservatives are the party of entrepreneurs like Leander – she employs local people and is part of the backbone of the local economy. I want to continue to provide the support to business owners like Leander and if that means we need to look at business rates again then we absolutely must.”

Danny also visited Urban Rustics in the Old Swan Yard and spoke to owners Christopher Poyser and Kate Filby. The award-winning interiors shop specialises in contemporary and countryside inspired gifts and homeware and currently buys from all over the world.

Christopher said, “What will happen after Brexit is what I need to know. Boris wants to get Brexit done but it will inevitably impact on how I can do business with other countries and at the moment we just don’t know what the details of his plan are.”

On Brexit, Danny said, “For businesses like Urban Rustics and anyone who trades with countries inside the EU it is critical to back the Prime Minister in getting Brexit done quickly and efficiently.”

Phil O’Shea owner of The Peppermill described to Danny the progress his business had made over the last eight years and the plans he has for expansion into the old Crown Centre.

Phil said, “The hospitality industry is one of the hardest to succeed in and we are lucky to have lots of regular diners who love our style of food and the atmosphere we have created. Having more rooms in the hotel next door will bring in more customers, which is good for us and the town. I’d like to know what is happening with the railway station as we should be attracting more tourists into the town and having better public transport is key to increasing visitors.”

Danny said, “One of the first things I asked for when I was selected to stand in the general election was a briefing on what is happening with the plans for a railway station in Devizes. I know that work has been going on to look into extending the line to Devizes, which will help local commuters as well as bring visitors to the town.

Devizes is a town with so much going for it and it’s clear from talking to people this morning that there is a great community spirit, a lot of talented independent business owners and a sense that with some help sorting out things, like the urgent care centre, the town will be an even better place to live and work in.”

Politics is back and bloody. Parliament is angry with No 10 again, the EU is taking it to the wire again, and many people are distressed and discontented with the Government.