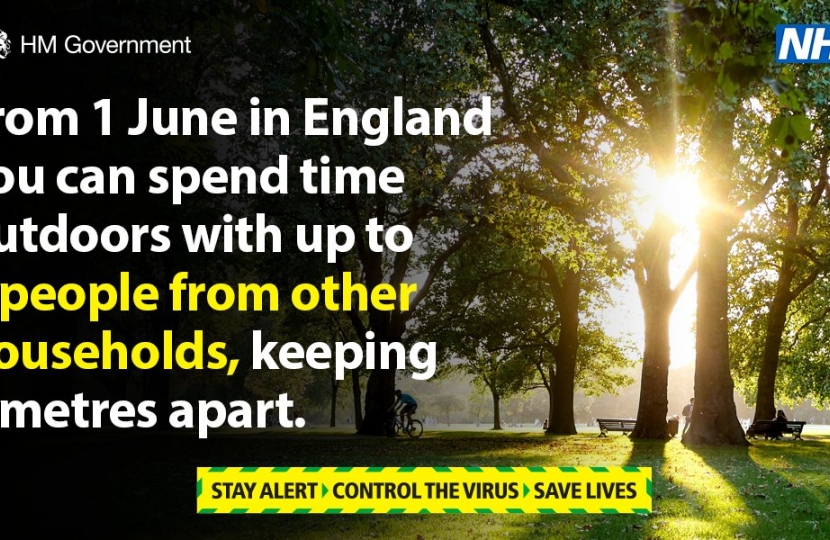 A weird week. I am sorry that between us, the politicians and the media have whipped up a storm that in no way helps the country’s battle to recover from the coronavirus crisis. I feel we’ve sufficiently examined the Cummings family’s peregrinations to and around the north-east of England six weeks ago, and so I don’t propose going over it all again here. To those outraged by Mr Cummings and by the Prime Minister’s (and my) defence of him, I can only repeat how sorry I am to have disappointed you so much. I accept that for many people his and the Government’s actions are entirely unacceptable, but I take a different view. I hope we can now put it behind us. If you are interested, I have written a detailed response to the questions raised with me by constituents here. Once I’ve finished replying to all the emails, may the words ‘Barnard Castle’ never pass my lips again.

The real story of the week was the announcement of the easing of the lockdown. From Monday some social mixing will be allowed between families, in gardens. This is brilliant news and I hope everyone enjoys seeing (a few) friends and family at last.

Following my online meeting with headteachers last week, I wrote to the Education Secretary setting out a series of concerns about the return to school of three year groups, which is due to begin next week. You can read these here. As far as I can tell our schools have performed heroics to get ready for Monday - organising dedicated teaching space for ‘pods’ of 15 children each, each with a single teacher, none of whom must come into contact with other children or adults through the day. It’s a huge logistical challenge and I thank the schools for their work. I very much hope the Secretary of State will take on board the concerns I raised about further year groups returning before the summer holidays.

This week the Government also announced the plans for ‘track and trace’, to ensure people can live as normally as possible while allowing for a quick and local response to any flare-ups in local infection rates. There is still some uncertainty about how the system will work. I have been in contact with the Health Secretary about this, emphasising the importance of the local effort (the role of public health professionals on the ground and local community groups) alongside the national effort. Phone apps and big call centres run by Deloitte and Serco can only do so much.

We had some great local news this week. The Government has given the green light to the plan for a new train station for Devizes (actually at Lydeway, just outside the town). We were only one of a handful of projects given the go-ahead to the next stage, and I take this as a really encouraging sign that the business case adds up. I was honoured to sponsor this plan and to lobby for it to ministers, but the real work was done by Councillor Richard Gamble, Iain Wallis of the local Federation of Small Businesses, the rest of the Devizes Development Partnership and Wiltshire Council Transport Team. My thanks and congratulations to them and I look forward to working together to deliver the vision for the new station.

MPs return physically to Parliament this week. The arrangements for speaking by video have lapsed and it’s unlikely they will be renewed. I’m unsure how things will work but I very much welcome the return, and the possibility of real debates (rather than a series of speeches to camera) happening again. The political scene has darkened recently. I hope to play my part in supporting the recovery.

In the 1780s a group of Wiltshire politicians led by Lord Shelburne and William Pitt the Younger helped Britain recover from perhaps its greatest ever political calamity, the loss of the American colonies. They did this by modernising government and reforming Whitehall, reducing the size of government while making it more efficient and more fair. The calamity of coronavirus is another opportunity, indeed an imperative, to fix our political system, our economy and our social model.

Speaking of the social model: as I’ll have to be in London on Tuesday mornings for the foreseeable I have had to hand in my notice for my weekly shift manning the Covid Response Helpline at Devizes Town Hall. I have been enormously impressed by the calm professionalism and good humour of the council staff and volunteers (mostly organised by the Rev Keith Brindle and his son Joe at St James’s Church). They have shown exactly what government and communities, working together, can do, and I will always remember (and cite) this as a model for the system we want to see more generally.

When I was elected I promised to hold occasional public meetings to continue the conversations that took place at hustings during the election campaign. We only managed to have the first of these, at St Mary’s Church in Marlborough, before the lockdown. Rather than waiting until we can have a mass gathering again, I will hold the next meeting on Zoom. It will be at 5pm - 6.30pm on 12 June, and will be open to all constituents. If you would like to join, please email me at danny.kruger.mp@parliament.uk, including your full name and address. Once we have an idea of how many people are attending we’ll work out a way of structuring the event and making sure as many people as possible can comment or ask questions. I won’t screen or control the questions, I promise!

My response to campaigns regarding the FCO and DFID merger

I have had a number of organised campaign emails from constituents regarding the FCO and DFID merger. This is my reply to those emails.