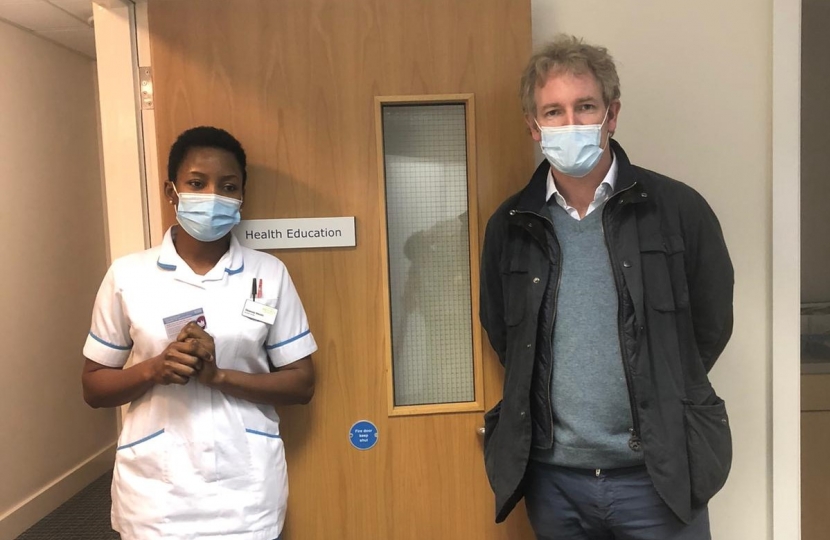 Please forgive (or thank me for) a short newsletter this week, as it was Parliamentary recess and half term.

On Thursday I visited the vaccination centre at the Ramsbury surgery. Everything good about the NHS and the British people was on display: the good-humoured waiting your turn (though no one had wait for long), the unobtrusive efficiency, the quiet though no doubt passionate rivalry (one station consisted of a jabbing team deployed from Pewsey, silently striving to outpace the native Ramsbury jabbers), and the peculiar and possibly unnecessary queuing system that snaked round and through the building. It was an Astra Zeneca day, which meant a quick release of patients, once vaccinated, out into the carpark; on a Pfizer day they have to wait for 15 minutes in a vestibule before departure. All in all, a brilliant demonstration of a brilliant programme. 450 people were vaccinated the day I visited. My thanks and congratulations to the partners, Practice Manager Alison Harrod and all her colleagues.

On Friday I hosted the Wiltshire Climate Summit, online of course. This November in Glasgow the British Government hosts COP26, the grand jamboree for discussion and decision-making about global warming. The UK leads the world on reducing carbon emissions, with a legal commitment to eliminate our contribution to climate change by 2050 and great progress already. But much more needs doing to get there. As Claire Perry O’Neill, my predecessor as MP and former President of COP26, reminded the summit, the UK need to cut emissions by 11% a year to hit net zero by 2050. Over the last year, with no planes flying and hardly anyone driving anywhere, we reduced emissions by 8%.

The summit, which also hosted the PM’s envoy to business for the net zero target, my colleague Andrew Griffith MP; NFU President Minette Batters; and a host of local farmers, businesspeople, students, activists and other residents, explored a range of options for reducing mankind’s harm to the planet - while ensuring we don’t just stop the engines of the economy and further disadvantage the people and places left behind. I look forward to more discussions on environmental policy and to representing as many of these ideas and voices as I can in the run-up to COP26.

My local history guru John Chandler has a field day with Ramsbury: the Roman origins; the ancient border with the Savernake Forest south of the River Kennet; the Saxon hillforts - communal refuges from attack, along the escarpment on the valley’s height; the lovely medieval houses Ramsbury Manor, praised by Pevsner, and Littlecote, built by the suspected infanticide William Darell; and the bishopric of Ramsbury, which predates and in sense fathered the modern see of Salisbury which now it is suffragan to, but in the middle ages encompassed all Wiltshire and Berkshire.

This was a major place, a leading town of old Wessex. Its status mellowed in the modern era. In 1781 a Wesleyan preacher predicted a fire, and had the town’s fire engine turned on him for his trouble; sure enough, the town shortly after partly burned down. It was the home of Sir Francis Burdett, the radical orator and instigator of the Great Reform Act of 1832. We are, as ever, dwarfed by our history.

I am looking forward to the Prime Minister’s announcement tomorrow which will. I trust, set out the steps to end the lockdown.