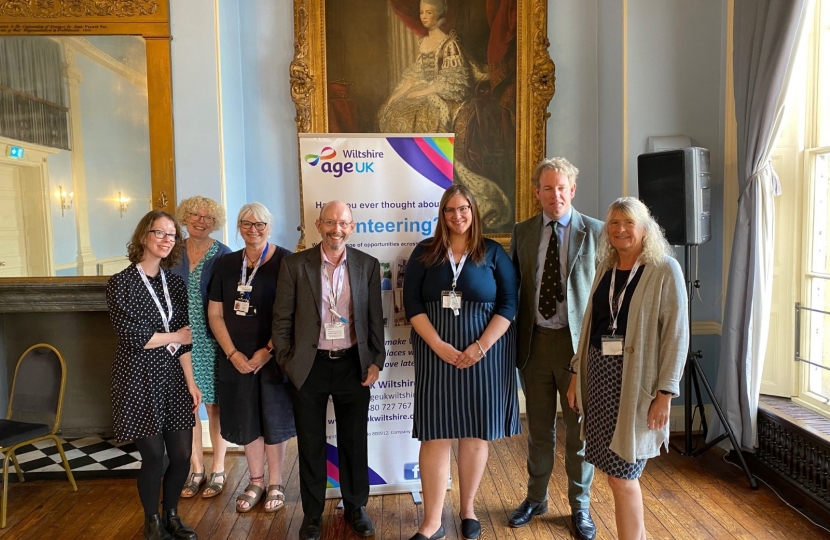 This week, with the first fall of leaves, the MPs returned to Westminster for the new term. We had come back briefly in July to debate the withdrawal from Afghanistan; I sat through the seven-hour debate without being called to speak, but learned a lot and shared the general sense of shame (I wrote about it all here).

This week we had the chance to press the Prime Minister on the end of the evacuation and the resettlement of the thousands of Afghan refugees we will take in the months and years ahead. I praised Operation Warm Welcome - the government’s resettlement project - and asked the PM to ensure that Wiltshire has the support it needs to help the Afghans who come here. You can watch our exchange here.

I have also been working with the Council and the MOD to see whether some of the empty homes the Army rents - it’s frustratingly complicated why they are empty, but at least it creates this opportunity - can be used in the short term to house Afghan families. The Council is clear that refugees will not bump any Wiltshire people down the waiting list for social housing, and on this basis I strongly support their efforts to free up some MOD homes on a temporary basis.

I had a useful meeting last week with the new Police and Crime Commissioner for Swindon and Wiltshire, Philip Wilkinson, who was elected in August. Philip is a distinguished former Army officer with a lot of experience creating security and justice systems in failed states around the world - great training for Wiltshire. We discussed the need to get more police on the rural beat, and to improve the responsiveness of the force to complaints and indeed to the priorities of the public.

The charity Age UK delivers vital services and support for older people across Wiltshire. I spent a morning with some of their clients, carers and senior team in Devizes Town Hall, hearing about the great complexity of the system for funding and organising care. I also learned of the minor heroics which so many staff, volunteers and family members do to help elderly people live decent and dignified lives. We have the essentials of the system we need in adult social care - a mix of public and private funding, statutory, commercial and charitable providers, and of course families and communities that care deeply about supporting older and disabled people. We just need to inject more money and, even more importantly, introduce reforms to make it all work.

I hope that is what we are going to get from the Government’s commitment on social care. We voted this week to approve an increase in National Insurance contributions to fund the work needed to clear the NHS’s Covid-caused backlog, and then to invest more in social care. I voted with some trepidation, because if we don’t get the reform right - and we haven’t had the details on the intended system yet - this money could be wasted. But it is very good news that after years of dodging this vital policy problem, finally we have a Government committed to fixing social care.

I also spoke briefly in Parliament on the legacy of Jo Cox, the Labour MP murdered during the EU Referendum campaign in 2016. I know Jo’s family slightly and we have friends in common. I spoke about the importance she placed on cross-party working - on the unity that politics should foster - while explaining this doesn’t mean we all need to agree with each other. I profoundly disagree with Labour’s approach to social problems (which always seem to rely on more state power and less responsibility for individuals, families and communities) but I recognise we share the same goal, for a stronger and fairer society. My speech can be seen here.

I’m glad to be back in Parliament and am looking forward to the new term. I have set myself some new priorities, including campaigning for fewer HGVs on our roads (following the terrible tragedy in Collingbourne Ducis in July when a little girl was killed - I wrote about the issue here) and for less pollution in our rivers.

On Friday I spent a happy few hours with Tedworth Equestrian. Tedworth House is now known as the military rehabilitation centre run by Help for Heroes. It was formerly famous for its horses, in part because the estate included most of Salisbury Plain. A foxhunting fanatic named Thomas Assheton-Smith lived here in the 19th century and cleared 400 square miles of it to improve the sport, thereby creating the military training area which the Army bought from his heirs in the 1870s. Before that, however, the men of the Light Brigade laid out a polo lawn; it is thought the horses of the famous doomed charge in Crimea played on this ground.

Tedworth Equestrian maintains these traditions, with a riding school and subsidised polo for soldiers, and most of all, a range of activities for veterans and the local community. I was proud to officially open the new hoist that will lift disabled people onto horses - we were given a demo, with a brave volunteer and a former Household Cavalry horse called Petey (short for PTSD - army humour) showing how it works. Do support them - find out more here.