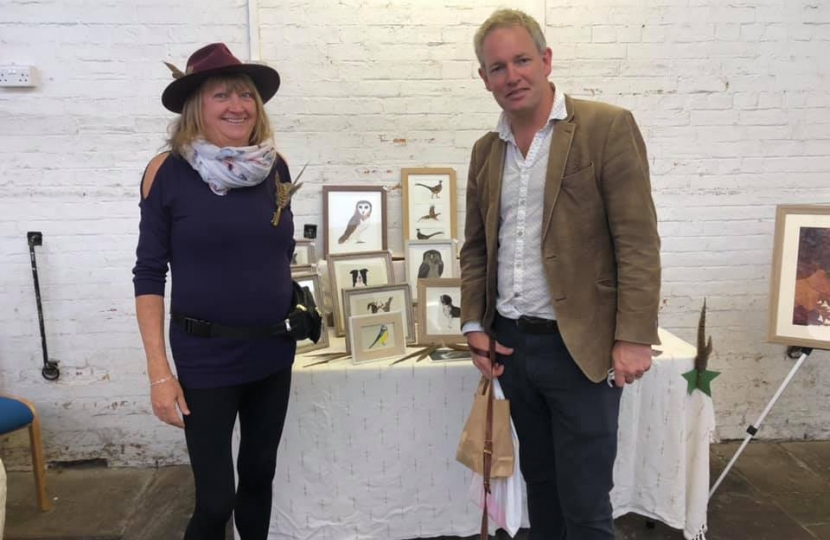 I thought I’d leave you alone for August, not least because there was no Parliament to report on and while the casework continued unabated I did less meetings and visits than usual, so had less to tell you about. I even got a week in Cornwall with the family, which felt like a proper holiday until I bumped into Matt Hancock on the beach (he didn’t look thrilled either). Here’s what else I’ve been up to.

The early part of the summer break was of course dominated by the confusion and anxiety of the exam results imbroglio. Once again - on behalf of the Government which I support - I am so sorry we got into such a mess. I really hope everyone who should have received a university offer now has one, and that new students are happily starting their studies, or whatever it is they went to university for (in a Covid-secure manner, of course). I am keen to help anyone still suffering the effects of the algorithm-induced chaos, so do get in touch.

This wonderful Wiltshire landscape doesn’t look after itself, you know. I don’t just mean the farmers (of whom more in a moment), but the brilliant charities and organisations who keep the land and the waterways clean and accessible. I had a wander with the Wiltshire Ramblers from and back to Rowde (after a tremendous lunch at the George and Dragon), along paths, towpaths and bridleways all maintained by different bodies, mostly voluntary, who sustain the countryside from generation to generation.

In a zoom call, the boss of the Canal and River Trust, a national body which does what it says on the tin, told me I represented one of the best constituencies for canals in the whole country. He says that to all the MPs, of course, but in the Kennet and Avon we really do have a national treasure, supported by hundreds of volunteers. Yesterday afternoon I went aboard one of the famous Bruce Boats at Bedwyn - a riverboat with full disabled access, also run and maintained by volunteers. They need more help - do get in touch. 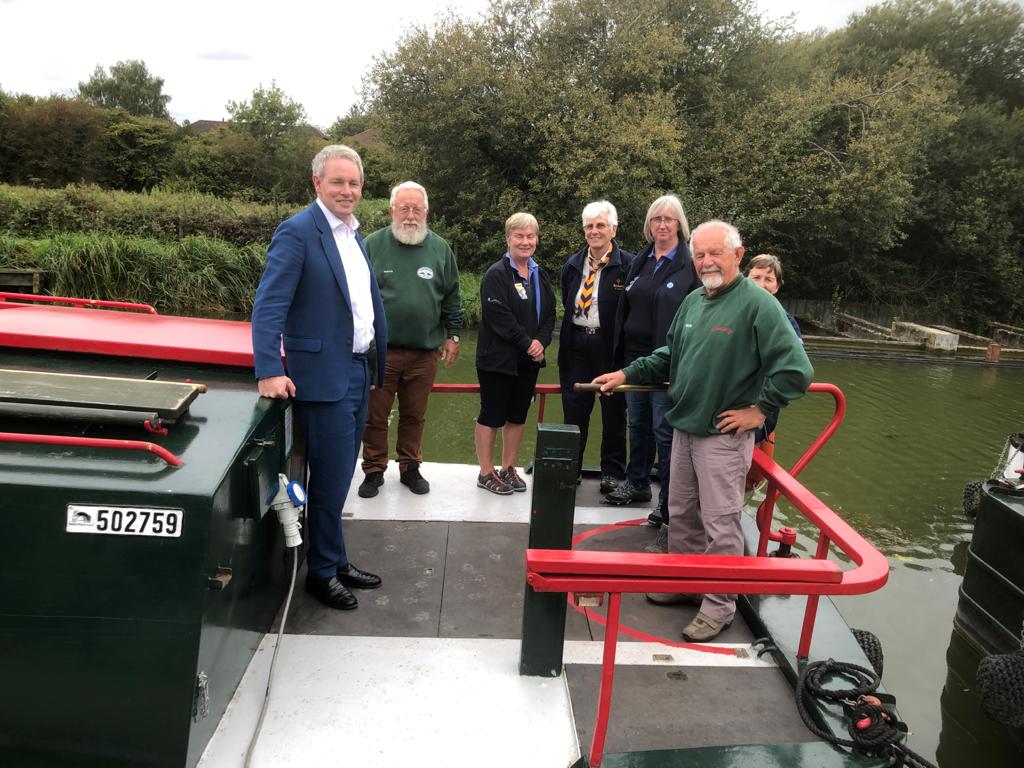 Speaking of our ancient and beautiful landscape, in an earlier newsletter I summoned the ghosts of forty generations of the Uffcot dead to oppose planning permission for more light industry at the nearby Wroughton airfield. Always one to look after I leap, I have since visited the site and have a better understanding of the wish of the company - Earthline - to expand their operations. I still share the concerns of Uffcot about access to the site, however, and want to work with Earthline, and with local councils, to find better means of getting lorries and cars on and off the site.

The airfield, as you may know, was knocked up in a hurry in 1940 - or at least the hangers were: vast domed rectangles, made for the repair of Spitfires and built to withstand a direct bomb strike. Now they are used for manufacture and storage. I saw a machine that mends oil pipes undersea, and also, in a corner (I only know because I asked about it), the car that drove General Mountbatten to receive the Japanese surrender in Singapore, seventy-five years ago today (12 September 1945). Can this be true? It’s what they told me.

The ‘rule of 6’ is a horrible thing, but necessary; it is an even greater shame that all the laws and fines and the horrid-sounding Covid Marshalls are necessary too. I really hope the greater clarity the rule brings won’t stop people meeting in small groups and, not least, getting out and about and supporting our shops. I spent last Saturday in Devizes marketplace where Indie Devizes - a collective of independent shops - were celebrating the brilliant spirit of independent retail that gives the town such a unique spirit. Please do shop in person or online with them - read more here. 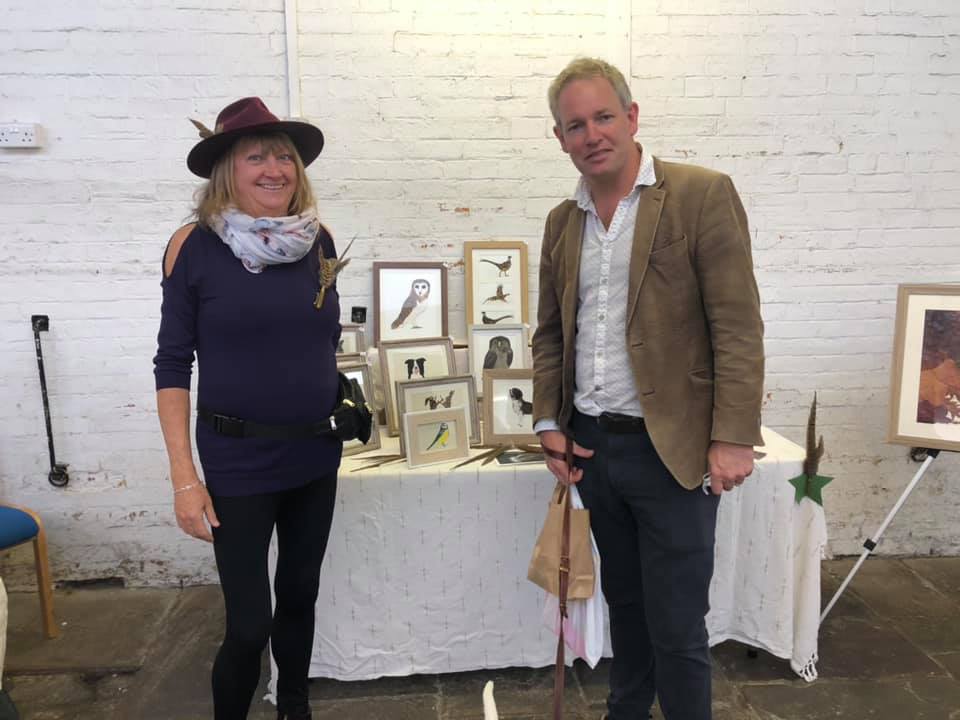 Parliament is back, though my hope that we’d be able to use the chamber properly - without the 50-member-only limit which gives the place the atmosphere of the moon - has not yet been realised. I asked a question about foreign food and the trade deals and got a very good answer from the Agriculture Secretary, which you can see here - he agrees we need to put tariffs on imported food made with techniques that are illegal for our farmers to use. I also asked the Church Commissioner, the great Andrew Selous MP, to agree with me we need less prejudice in the public sector against faith-based organisations, which do such a brilliant job in so many ways in our communities, and could do more: my question and his answer are here.

You may, or may not, be worried that the UK is about to become a rogue state, tearing up its treaties and reneging on its international obligations. If you are, please don’t be. Yesterday evening I joined a zoom call with the Prime Minister who explained clearly how the EU, by threatening to use the Withdrawal Agreement to impose tariffs within the UK if we don’t accept their version of a Free Trade Agreement - i.e. obey their rules on regulatory standards and state aid - is itself breaching the good faith on which the Withdrawal Agreement depends; as a result we are quite right to invoke the clause in the Agreement which allows for unilateral action to protect the internal market of the UK. Of course we won’t have to use the provisions of the new bill if the EU agrees a deal that we, as an independent sovereign nation, can accept. I hope they will. I’ve written more on the UK Internal Market Bill here.

Have a very good weekend.