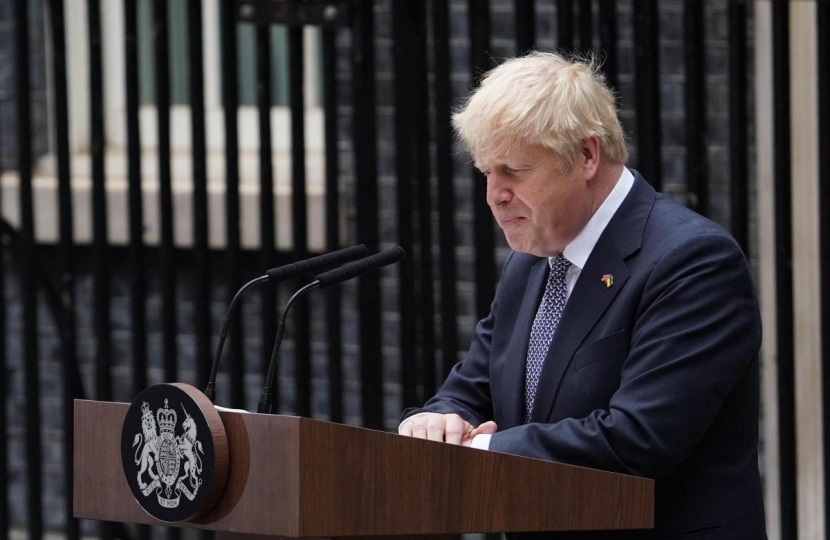 I voted for Boris Johnson in the 2019 leadership election and worked for him in No 10 before I became an MP in December that year. I have supported him ever since, despite the mistakes he has made personally and despite some disagreements I had on policy.

Boris Johnson stood for the realignment that the 2016 referendum and the 2019 election brought about in our politics. He created a new coalition of voters, encompassing both the Conservative Party’s traditional base in market towns and rural districts, especially in the South, and the industrial areas of the North and Midlands. He promised to govern for the people and the places left behind by the economic model that saw growth concentrated in London and the South East, and to represent the values and interests of ordinary British voters rather than the culture of an out-of-touch elite.

I said in Parliament earlier this year that the Prime Minister was ‘anointed’ by the electorate to deliver this mandate. Until very recently I felt that to abandon him would be an insult to the people who backed him in 2016 and 2019, and a breach in our democracy: whatever his mistakes, he had a right to govern for a full term and then face the voters again on his record.

The last week has seen this anointing - already worn thin by successive scandals and bad responses to them - disappear altogether. Number 10’s reaction to the revelations about Chris Pincher was to dissemble and obfuscate. In consequence the PM’s standing with my Parliamentary colleagues, and with me, has plummeted.

Yesterday (Wednesday) after Prime Minister’s Questions I told Number 10 privately that in my view the game was up, and that he should resign on his own terms before he was pushed. I didn’t want to make my criticism public, or to ostentatiously give up my own junior government role (Parliamentary Private Secretary in the Levelling Up Department), before the PM had the chance to digest what was happening and, I hope, take the advice I and many other colleagues were giving him.

One of these colleagues was my departmental boss Michael Gove. Instead of heeding my and Michael’s advice to resign, however, last night the PM called him to tell him he was fired. When I heard this, I immediately resigned my PPS position too (see here).

I am relieved that today the PM faced reality and has given up the fight. His achievements - breaking the Brexit impasse, leading the country through Covid-19 and leading the West in its support for Ukraine - are historic. But it is right and necessary that he now steps down.

Attention now turns to his successor. I will have a good look at the candidates who emerge, and give my support to the one most likely to deliver on our promises of 2019, and to deliver prosperity and good government for the people of Wiltshire.

P.S. While I have you… I wanted to take the opportunity to highlight the statement I issued about my comments on abortion last week. If you have only seen the headlines and want to know what I actually said - and think - please read here.