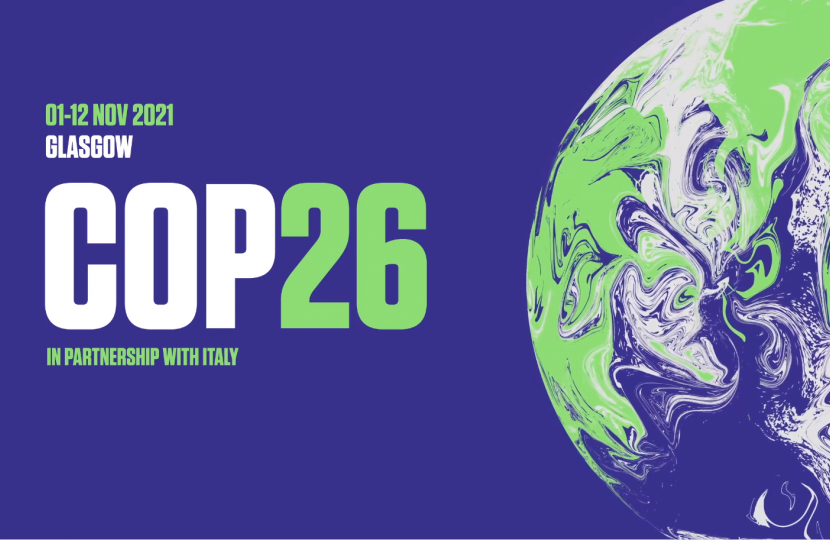 Many thanks to those who have contacted me about tackling climate change and the United Nations Climate Change Conference (COP26) which is taking place in Glasgow in November 2021.

Climate change is one of the greatest challenges we face, and I can assure you that I recognise the importance and urgency of action on this issue.

When the UK hosts COP26, we will bring together world leaders, climate experts, business leaders and citizens to agree on ambitious action to tackle climate change.

The UK has a proud record on climate action, being the first major economy to legislate to achieve net zero by 2050. I support the Prime Minister’s Ten Point Plan which will allow the UK to forge ahead in eradicating the UK’s contribution to climate change.

As included in the plan, the UK will produce enough offshore wind to power every home, quadrupling how much we currently produce to 40GW by 2030, thereby supporting up to 60,000 jobs. The Government will work with industry and aim to generate 5GW of low carbon hydrogen production capacity by 2030 for industry, transport, power and homes. In addition, the Government aims to develop the first town heated entirely by hydrogen by the end of the decade. The UK will also become a world leader in carbon capture technology to store harmful emissions away from the atmosphere, with a target to remove 10MT of carbon dioxide by 2030, equivalent to all emissions of the industrial Humber today, through £200 million investment. Finally, from £525 million investment in nuclear as a clean energy source this will develop the next generation of small and advanced reactors which could support 10,000 jobs.

Other parts of the plan include a target to install 600,000 heat pumps every year by 2028, £1 billion funding to make our schools, hospitals and homes more energy efficient, planting 30,000 hectares of trees every year, promoting and investing in zero-emission transport and £20 million to develop clean maritime technology. The plan also includes a pledge to end the sale of new petrol and diesel cars and vans by 2030, while the sale of some hybrid cars and vans will continue until 2035.

This plan will mobilise £12 billion of Government investment to create and support 250,000 highly-skilled green jobs across the UK. It is expected to spur over three times as much private sector investment by 2030.

I will continue to monitor the situation. Thank you again for taking the time to contact me.