Imports, food and farming: My view on the Agriculture Bill 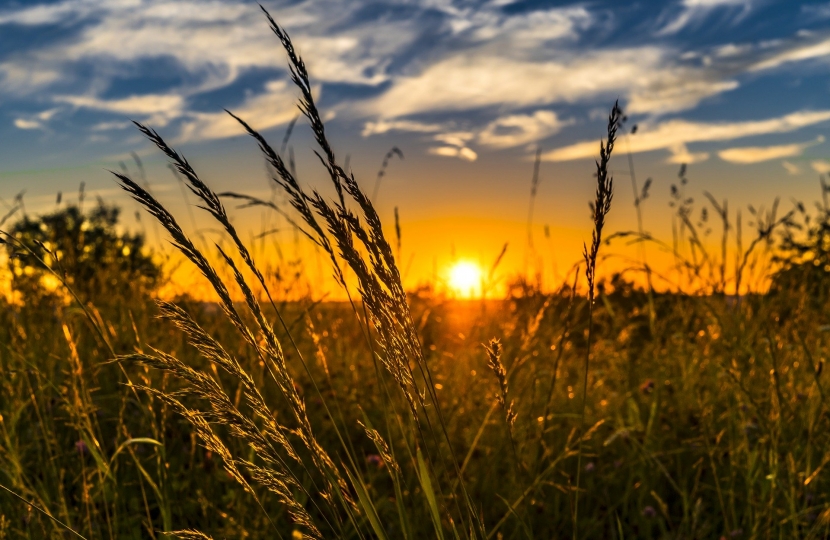 Today the Agriculture Bill is being debated and voted on in the House of Commons. This is the most important piece of legislation for the rural economy since the 1940s, as it sets the terms for farm support for the post-Brexit era. For 40 years agriculture policy has been set in Brussels. Now, it’s up to us.

The Bill comes at a critical time. Farming was struggling anyway, and the terribly wet winter and a parched early spring threatened a poor harvest this year. Then the virus struck, and the most profitable market for food, the ‘foodservice’ sector, closed overnight. Retail food sales are up, of course, but the margin is lower and not all farms are equipped to serve the supermarkets anyway. Prices for prime beef, barley and hops - all aimed at pubs and restaurants - are in freefall. We also have a substantial overproduction of milk.

The Government is stepping in to help in multiple ways, but the crisis reminds us how precarious our agriculture sector is, and how important our food security is.

I am sorry not to be able to take part in the debate today. In common with all the MPs who served on the Bill Committee, who are usually guaranteed a speaking slot, I was not called by the Speaker this time. Blame the virtual Parliament with its short sitting times. But that’s for another post. I’ll write here what I would have said in the Commons.

The main thing to say, in an apologetic tone, is that I won’t be supporting the amendments to the Bill tabled by the Opposition and by some Conservative MPs. These state that under future trade agreements with other countries, such as the US, the UK will not import food produced to lower standards than our own producers operate under; or put another way, we won’t import food that would be illegal for British farmers to make.

I completely agree with the spirit and the intention of these amendments. However, there are some good reasons why I don’t want them inserted into the Agriculture Bill. The first and most obvious is that this Bill is about the regulation and support of British farming, not the regulation of future trade deals. It is true that a bad trade deal will undermine a good Agriculture Bill, but that is an argument for getting the trade deals right, not for tampering with domestic legislation.

Second, the amendments would impose a very crude obligation on our trading partners. We already have rules on food safety which means nothing can enter the British market if it doesn’t meet high hygiene standards. And we can and do introduce ad hoc bans as we see fit. This means chlorine-washed chicken and hormone-fed beef can’t be imported here. But regulating the production processes of farms in other countries - or insisting other countries adopt British farming practices in order to trade with us - might be called diplomatic overreach, and would be incredibly hard to implement.

It would also immediately put a stop to a lot of imports from the EU, Africa and elsewhere which are produced to ‘lower’ standards than we apply at home. There may be a case for stopping these imports too, but I suggest this is not the moment for that.

I completely agree with the environmental and animal welfare lobbies - and with British farmers - that we should not simply offshore our carbon emissions and our animal cruelty by introducing virtuous rules for producers at home, while buying cheaper stuff from abroad made to lower standards.

The way through is, I believe, to use our leverage in the trade talks to drive standards up, not compete in a ‘race to the bottom’ on standards. We should think less about price - food in the UK is the 3rd cheapest in the world after the US and Singapore - and more about quality. (‘Food poverty’ is poverty, and needs other solutions than even cheaper food). Post-Brexit we can introduce the world’s best labelling system so people know exactly where their food comes from and what production values it was made to. This will enable people to support local produce and British farmers. We need ‘Buy British’ and ‘Buy Local’ buttons on supermarket websites.

Overall I am very positive about the Agriculture Bill, which moves us from the ruinous Common Agriculture Policy to a system that rewards farmers for the food they produce and the environmental stewardship they provide. Much detail is still lacking, of course - and I am concerned at the pace of phasing out the old Basic Payment Scheme - but overall this is a tremendously important and positive step towards a better system for British farmers. Our next task is to ensure that the trade agreements we will strike with third countries honour the vision of the Agriculture Bill.