Dominic Cummings - a final response to the comments I have received 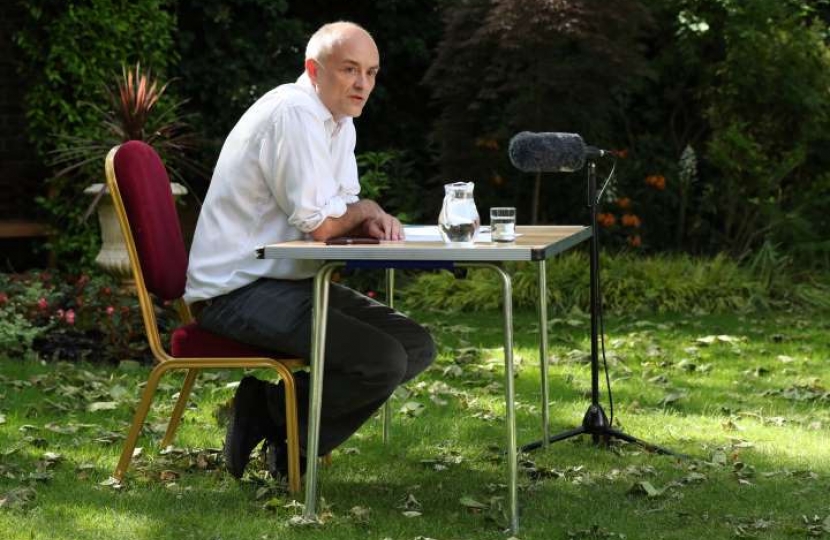 I have received an enormous amount of emails complaining about Dominic Cummings, the Prime Minister’s support of him, and my support of them both. Some were abusive but most, while angry or dismayed, had perfectly legitimate comments or questions. I attempted to give my response in a general reply. I have had almost as many responses to that email. More have poured in following some tweets I wrote in support of the Government and the Cummings’s, and after a private message I sent to fellow MPs was leaked (by a fellow MP).

I’m sorry I can’t give individually tailored responses to each email. If I did so I would do no other work for the next month. Every one has been read and I have taken on board both the general outrage and the more particular points that have been raised. Where people have questions about their own circumstances, or bring distressing personal information - including bereavement - to my attention, I will reply personally as soon as possible.

Almost all the emails ask one or more of the following questions, which I attempt to answer below. I do so as directly as possibly, in the same spirit as most of the emails I received. I am aware that in most cases the answer will not satisfy you or cause you to change your mind. But I hope you will accept that I understand the accusations that are being made, and that I have set out my position clearly.

I will not be engaging further in correspondence on Mr Cummings’ conduct, or my or the Government’s response to it. If you have particular questions or actual (rather than hypothetical) circumstances affecting yourself regarding the lockdown rules which you feel are impacted by the episode, or wish to make me aware of what has happened to you or your family during the lockdown, I will of course reply and help where I can.

Once more, my apologies and regrets that I am not able to represent your views in this matter. Politics is tough and I have discovered the price of doing what I think right this week: a huge number of people accuse you of a disgraceful lack of principle. I hope the following answers go some way to explaining myself.

Can’t you see that Mr Cummings broke the rules?

Not by driving to County Durham with his family. I can see that he stretched the rules to breaking point with the trip to Barnard Castle, and stretched our credulity to breaking point with his explanation of it. Everything else he was accused of - visiting his parents, multiple trips north from London, walks in the bluebell woods - turned out to be false. So the only real offence, which is arguable, was the trip to Barnard Castle: as the police have concluded, the trip ‘might’ have been a ‘minor breach’ of the rules, but it would not have resulted in a fine or caution and they don’t propose to pursue it.

Is it one rule for people in power and another for everyone else?

No. Everyone has different circumstances. Mr Cummings’s happened to be complex. They included the presence of protestors at his London home, the absence of their usual childcare arrangements, and the demands of his job. This explains why he and his wife decided she and their son should stay in an empty property on his family’s farm, which is where he ended up self-isolating once he fell ill too. On Barnard Castle: I don’t believe anyone would or should lose their job for going for an hour’s drive one Sunday and stopping for a child’s toilet break, observing social distancing at all times. The same rules apply to everyone. We should acknowledge that the drive was a mistake, and move on.

He has insulted the efforts of millions of people - how can you defend him?

The overall message of the emails I’ve received is that Mr Cummings’ actions are an insult to the people who have done so much (whether by working as key workers, or simply by making great sacrifices to stay home and apart from loved ones) to get the country through the coronavirus pandemic. I am very sorry indeed for anyone who feels insulted by what they did; I wish it hadn’t happened, and that you had been given no cause for offence. But I do not believe the Cummings family acted casually or with any disrespect or disregard for the public. It is a principle of justice that one should be judged by your actions and your motives, not by how others perceive them. On this basis, I do defend him.

No, but you must follow your best judgment. The guidance cannot explicitly cater for everyone’s personal circumstances. In the Cummings’ circumstances, the police have concluded that the trip from London was within the guidance, so their judgment was accurate on that occasion; the trip to Barnard Castle, not so much. We are all responsible for applying the guidance to our own circumstances, and must answer to the police if they have reason to think we have breached the rules.

Hasn’t he undermined the public health message and put the public at risk?

This is the most important allegation, in my view. People say that if the public doesn’t trust the government they are less likely to comply with its requests to observe social distancing and the other measures of lockdown. However, many people (especially, I suspect, many of those who have written to me) did not trust the government before; they, like everyone else, have obeyed the lockdown guidance because they agree it is necessary. People are sensible. One arguable minor breach by a government adviser cannot be interpreted as a green light to flout the rules.

Why doesn’t he apologise?

Perhaps he should, for the Barnard Castle trip at least and for the possible harm to the government’s public health message. If you would be satisfied with an apology, I am glad of it and I am sorry he hasn’t given one. But I fear many more of his critics would not be satisfied with an apology, but would take it as evidence of his guilt and the conclusive reason why he should resign. To admit wrong-doing, however minor, in our political climate and for someone in Mr Cummings’ position, is tantamount to resignation. This is of course what most of the people writing to me wish to see happen, but what I hope will not happen.

You say he’s your friend. This isn’t a reason to support him

A number of people are angry that I’ve mentioned that Dominic Cummings and his wife Mary are old friends of mine. They suggest that in defending them I am openly putting personal friendship before the public interest. Not so. Though many disagree, I think the public interest - and justice, and basic human decency - are served by him keeping his job. I mentioned our friendship in order to declare an interest, and be transparent; to help make my argument that the Cummings’s are ordinary parents who made a decision (understandable and reasonable to me, if not to you) in a situation of great anxiety; and to explain why I was putting my head above the parapet to defend them publicly. I thought (and think) they hadn’t done anything wrong (or not terribly wrong); and I thought and think they need people to come out and speak up for them. If you believed your friend was being unfairly criticised, what would you do?

Why don’t you listen to the public and your constituents?

Sorry to sound pompous, but I’m here to act according to my conscience and my view of the public interest. I think the thousand or so constituents who have written to me about this are wrong, though I understand their arguments and how strongly they feel. I see that polls suggest most people in the country think Mr Cummings should be sacked. I note that and respect it, but I respectfully say I am guided by my own views on this, not other people’s. MPs are not delegates who merely poll their constituents on every question and adopt the majority decision. They follow their judgement for four years and then offer themselves for re-election.

Why is the PM defending an unelected adviser?

No leader in the world is surrounded only by elected politicians. There is no disgrace in Boris Johnson wanting to hold on to Dominic Cummings. He played key roles in the Vote Leave victory in 2016, the Conservative election victory in 2019 and our departure from the EU, with a deal, in 2020. As I have explained above, I don’t believe that what Mr Cummings did during the lockdown deserves sacking. The only further argument for dismissing him, then - which is an argument a lot of my correspondents make - is that he is ‘damaging the Government’s reputation’ or ‘distracting the Government from doing its job.’ To which I reply: the Government’s reputation should depend on its achievements in helping the country; and the distraction, if it exists, is the responsibility of the media and opponents of the Government who are presenting a single arguable minor breach as a series of major crimes. In my view, what people want isn’t a change of government advisers but a government that delivers on their priorities.

I have had a number of organised campaign emails from constituents regarding the impact of the coronavirus outbreak on people with disabilities. This is my reply to those emails.