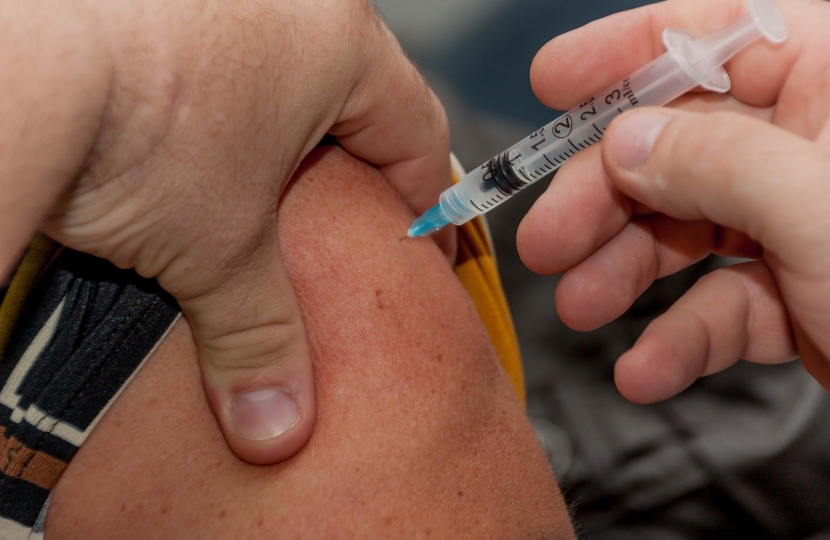 Since I wrote earlier this week on the rollout of the Covid vaccine, I have received a number of emails from constituents raising various concerns about the process. For the majority, they are writing as a person suitable for the first phase of vaccination, or on behalf of someone who falls into this category. Information about groups that should be (and are being) prioritised for vaccination is being published by the Joint Committee on Vaccination and Immunisation (JCVI). The committee’s full, independent report can be read here, but I will also summarise it below.

JCVI advises that the first priority in the vaccination programme should be the prevention of deaths, as well as protecting health and social care staff and systems. As the risk of dying from coronavirus increases by age, this is the primary basis for prioritisation. The Prime Minister said on Monday night that the NHS was committed to offering a vaccination to everyone in the top four priority groups (older care home residents and staff, everyone over 70, all frontline NHS and care staff and all those who are clinically extremely vulnerable and required to shield).  This will be followed by 16 to 64-year-olds with serious underlying health conditions and everyone aged 50 and over receiving the vaccine.

I appreciate that anyone in the first priority group, or their relatives, may be concerned if they have not yet been contacted to have the vaccine, especially if they’re hearing of other people the same age or younger receiving the Covid vaccine first.  The director of nursing for the clinical commissioning group covering Wiltshire, Gill May, recently released the following message in a briefing: “We have heard from many people who are concerned that they have not been invited to have their vaccination and wish to reassure everyone that the roll out is being phased over time. This ensures we first vaccinate those who are the most vulnerable and at risk. In BSW (Bath and North East Somerset, Swindon and Wiltshire) alone we have over 50,000 people who are aged 80 years and over so this will take a little time. We have started to vaccinate residents in some care homes this week with more sites being visited in the next couple of weeks and months.”

This is an extensive vaccination programme and it will take time to roll it out fully. While we are all very keen that our most vulnerable are vaccinated as quickly as possible, some patience is required during the rollout process. The CCG have said that, as soon as it is a person's turn to be vaccinated, they will receive details of their appointment either by phone or letter.

Many have also written asking why teachers (as well as other ‘frontline workers’ such as the police) are not being vaccinated, and suggesting that schools should not reopen until all teachers are vaccinated. The JCVI has said phase two of the vaccination will focus on further reduction in hospitalisation, as well as targeted vaccination for those at high risk of exposure or those delivering key public services. The committee has considered evidence given on the risk of exposure and the risk of mortality by occupation as part of this. While I agree that ideally anyone who regularly faces the public should be vaccinated as soon as possible, the first priority is, rightly in my view, protecting the most vulnerable. This will hopefully prevent as many deaths as possible while protecting the NHS. Teachers over 50 and those under 50 with an underlying health condition will be vaccinated as part of phase one. Further occupational prioritisation will follow later.

People have also expressed concerns about the organisation of the NHS in distributing the vaccine, or expressed a lack of faith in the logistical processes being put in place. I think it is important that the rollout is monitored and will continue to watch this closely, both locally and nationally. NHS England have said Devizes Corn Exchange, Ramsbury Surgery, Salisbury District Hospital and GWH Swindon are vaccination hubs, and GP surgeries across England are also starting to roll out the vaccine from yesterday (Thursday). Over 1.3 million people across the UK have already been vaccinated, and the NHS is committed to vaccinating more than 13 million people by February 15.

Across Bath and North East Somerset, Swindon and Wiltshire (the area our CCG covers) more than 13,000 people have already had the vaccination. Seven community-based vaccine sites have been in operation since December (including the Devizes Corn Exchange and Ramsbury Surgery in Marlborough), with seven more opening this week (including Tidworth Leisure Centre).

I am aware many have applied to become volunteer vaccinators, and that this process is currently not moving as quickly as desired. As is often the case in Britain, a call for volunteers has led to an army of current and former NHS staff applying to become vaccinators, with tens of thousands having already completed their online training to do so. These are being processed as quickly as possible and volunteer vaccinators will be deployed as more vaccine supplies become available. The Health Secretary is currently looking at how this process can be streamlined, and I hope that soon it will be even easier to volunteer to help.

News reports earlier this week that pharmacies have been ‘snubbed’ from the vaccination process have also caused concern. I’m pleased that the Minister for Covid Vaccine Deployment, Nadhim Zahawi, has confirmed that community pharmacies will be “very much involved” in delivering the vaccine, and that pharmacists including Boots and Lloyds are discussing the best way to help with health officials.