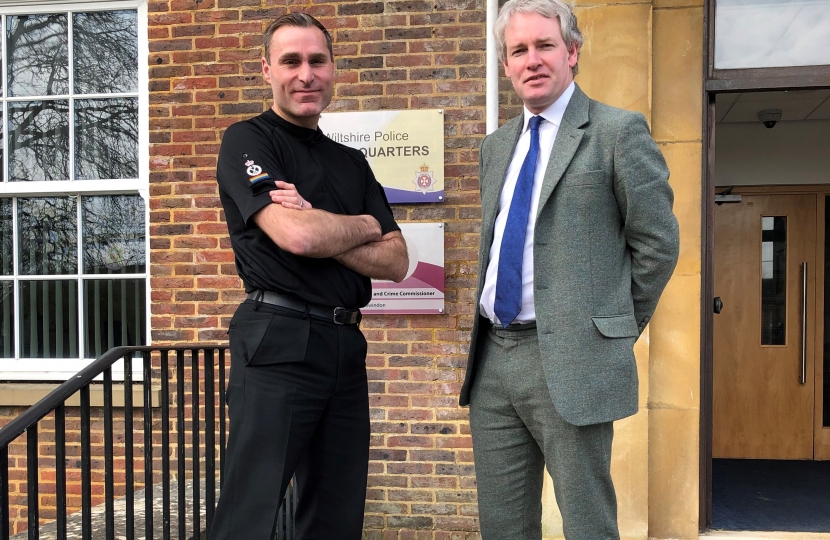 Rural crime is a major concern for our communities. During the election campaign I was struck how often this issue was raised - even though the statistics suggest crime overall is falling. Clearly, something is going wrong with the way we record crime, and more importantly with the way we respond to it.

Crimes that people raised with me include theft and burglaries, especially in isolated farms and houses; drug dealing, especially the new phenomenon of ‘county lines’ drug operations; and trespass, particularly for illegal hare coursing. Each of these requires its own strategic response, but they all share one need: more police.

The Government has committed to recruiting an extra 20,000 police officers over the course of this Parliament. This is extremely welcome. However, we need to make sure that a fair share of these new coppers serve Wiltshire. Rural police forces often lose out in national funding allocations. This is because the formula used to divide up the money puts a greater emphasis on urban areas. I pledge to fight, alongside the Police and Crime Commissioner, for a better formula for Wiltshire and more police on our roads.

County lines is an evil menace, and I hear anecdotally of a growing problem in Devizes, Marlborough and even smaller places like Pewsey and Ludgershall. Again, much of the funding for the response to this problem has gone to the places the county lines start - in the big cities - rather than in the small towns where they end. As we increase police patrols we also need more targeted police work to disrupt the sale of drugs in our communities.

I am appalled at the amount of illegal hare coursing in Wiltshire. Our big open fields seem to attract criminals who make money from live-streaming their activities to gamblers across the world. They also threaten and sometimes do violence to anyone who tries to stop them. The outcome of this strange global business is an increasingly locked-down countryside, as farmers padlock gates and dig ditches and banks to stop vehicles entering fields. We absolutely have to crack this.

Again, more police is the first part of the answer. The Government has also announced its intention to make trespass a criminal not merely civil offence. And I want to work with farmers to support their own valiant efforts at mutual support and community safety. Working together police, courts and residents can end the scourge of illegal coursing.