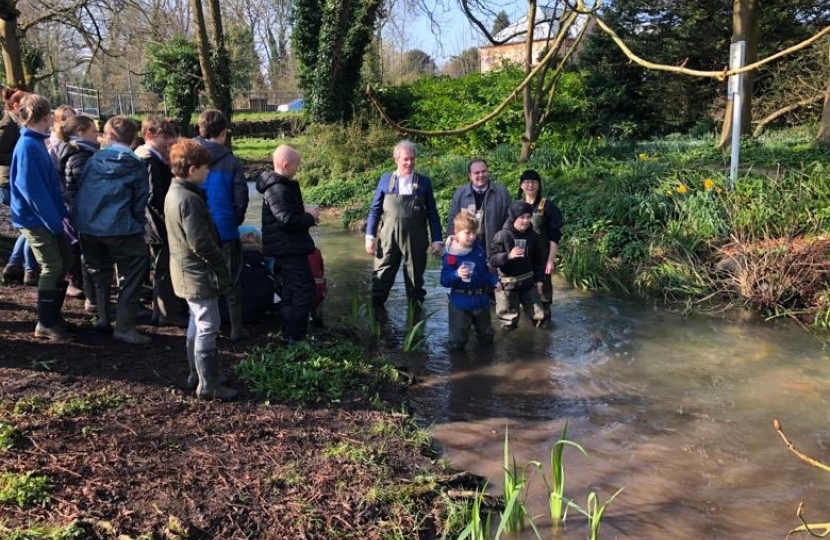 We also face the existential challenge of climate change. Ultimately, nothing matters more than this, and though it is a job of a generation, action needs to start now.

One of the reasons I voted Leave in the EU Referendum was because I think the Common Agricultural Policy is unfair to British farmers - and also to food producers in the developing world, who are shut out of a major world market by a system designed to protect French farmers from competition.

As we leave the EU we need to design a system which is fair to British farmers but also enables consumers to benefit from the world’s produce, all the while ensuring the highest standards of animal welfare and environmental stewardship. This circle - support for our farmers, global trade and competition, and environmental protection - is not an easy one to square.

I have heard an enormous amount from local farmers about their challenges and concerns, from the infamous flea beetle and its effect on the oilseed rape crop, to the prospect of competition with countries with lower costs owing to cheap labour, GM crops and pesticides. I pledge to work with farmers to develop our own, Wiltshire-focused proposals for the new land management system that will replace the CAP. I support the Government’s principle of ‘public money for public goods’, but much work needs doing on what public goods are.

The UK is a global leader in decarbonisation, with the fastest-falling emissions of any developed nation. We are on course to eliminate the use of coal altogether by 2025, and can achieve the ambitious target of zero carbon by 2050.

Man-made climate change is a modern phenomenon, but the response to it will be a combination of the very new and the very old. The new response is innovation: the development of technologies which will eliminate fossil fuels from the country’s - and eventually the world’s - economy. For this we must rely on the greatest engine of innovation in human history, namely the free market and responsible capitalism - underpinned by proper public investment in science and technology.

The ‘old’ response to climate change is one that comes naturally to Wiltshire: a thriving natural landscape. It is often argued that beef and dairy herds are a cause of climate change. In fact, high-quality, grass-fed cattle are a major cause of decarbonisation. This is because cows need pasture, which is one of the most effective means of capturing carbon there is. The ‘public goods’ which the new subsidy system will support must include recognition of the value of pasture. Similarly, the commitment to replenishing the trees of the UK is an opportunity for Wiltshire to earn income and improve the landscape. I am a particular supporter of the efforts of local organisations - such as the Action for the River Kennet group, and the Plant for our Lives charity - to replant the riverbanks and roads of the area with new trees and hedgerows.

Finally, I support all legal field sports. Shooting, in particular, is another means of preserving our environment and creating local jobs. I want to work with local shoots to ensure that every bird shot enters the food chain.

I am pleased to announce that I have today launched a new working group to make improvements along three of south England’s major rivers.

I had the pleasure yesterday of a visit to Langford Lakes, where a partnership between Wiltshire Wildlife Trust, which owns the land, and Wessex Water has delivered what is apparently the most efficient sewage treatment works in the UK - an artificial lake, full of reeds.

My thoughts on COP26 and gas and oil projects - November 2021

Many thanks to those who contacted me about COP26 and gas and oil projects.

There’s been a massive campaign on social media suggesting that Conservative MPs voted last week in favour of the practice of water companies discharging raw sewage into the rivers. I regret that our own communications operation should have been so poor that so many people actually believe this.

I'm pleased to see that Pewsey Vale Tourism Partnership has launched a new online planner for trips to the area -  Discover Pewsey Vale.

Wiltshire has been the epicentre of life and culture on this island for thousands of years. This is, in large part, due to its position as the triple hydrological divide of the South of England.

Have your say on Wiltshire Council's climate strategies - 9 September, 2021

Wiltshire Council is giving residents, businesses and local groups in the county the opportunity to have their say on its Climate Strategy, which will help to shape the next five years of its fight against climate change.

A Free Trade Agreement with Australia

Laura Farris (MP for Newbury) and I will be holding an online public meeting for Constituents at TIME on Thursday 24th June to discuss the state ofthe River Kennet.